Cambridge-based Intelligent Fingerprinting, developer of the world’s first fingerprint-based drug test, has won the prestigious Clydesdale Bank Business Innovation category at the SME National Business Awards 2018. The win was announced on Friday 7th December at Wembley Stadium, and recognises the company’s achievement in developing and bringing to market its revolutionary portable fingerprint-based drug testing solution for use at the point-of-care.

This major national award follows on from Intelligent Fingerprinting’s success earlier this year when it secured the 2018 Business Innovation and Overall SME Cambridgeshire Business categories at a local awards ceremony held at Newmarket Racecourse in June. Winning there resulted in an automatic shortlisting for the SME National Business Awards, with Intelligent Fingerprinting competing against 13 other category national finalists from a range of sectors including IT, Electronics, Engineering, Healthcare, Logistics, Media and Services. Intelligent Fingerprinting’s SME National Business Awards submission detailed how its non-invasive drug test works by analysing sweat from a fingerprint to determine if someone has recently used cocaine, opiates, amphetamines or cannabis.

“We’re absolutely delighted to have won the Business Innovation prize at this year’s SME National Business Awards. It highlights our company’s ability not just to introduce a revolutionary drug detection technology, but also to ensure that our solution is fully developed and manufactured to meet today’s growing market requirement for non-invasive drug tests,” commented Intelligent Fingerprinting’s CEO Jerry Walker. “We were also proud to be representing Cambridgeshire at the SME National Business Awards final. Cambridge is proving a great place for an innovative medical device diagnostics company such as Intelligent Fingerprinting to grow its business, and we look forward to building on this success as we focus on extending our company’s sales drive to support employers, coroners, drug treatment services and offender management operations in 2019.”

Fingerprint-based drug testing – how it works

Should an employee’s initial screening test prove positive for any of the four drugs tested – in contravention of a firm’s drug and alcohol policy – two further sets of fingerprint samples are gathered for confirmation testing using the Intelligent Fingerprinting Fingerprint Collection Kit for Laboratory Analysis. Informed written consent is obtained from the donor prior to sample collection, along with a statement of the donor’s prescription medication, if applicable.

Once confirmation samples have been collected, the Fingerprint Collection Cartridges are sent to Intelligent Fingerprinting’s partner laboratory for analysis. The laboratory provides the customer with a quantitative laboratory result in the form of a Certificate of Analysis.

Importantly, as a first in its class, all the company’s single-use cartridges can be recycled.

The system is currently being marketed to the criminal justice arena, drug rehabilitation services, offender management, workplace and occupational health services. The technique has potential for many other uses including healthcare diagnostics and homeland security applications.

Founded in 2007, Intelligent Fingerprinting is a spin-out company from the University of East Anglia (UEA).  The company is based in Cambridge, England and currently employs around 30 people. www.intelligentfingerprinting.com Twitter @iFingerprinting 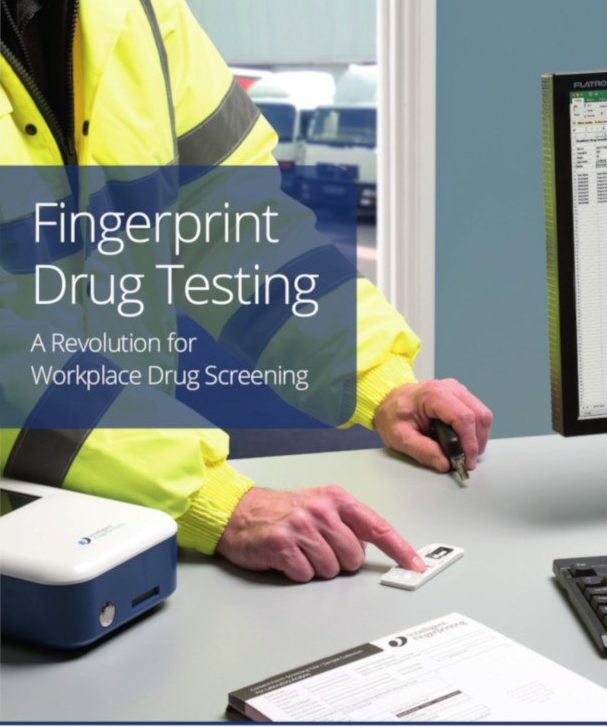